All articles
/
Data Analysis with Python
/
Creating Your First Notebook 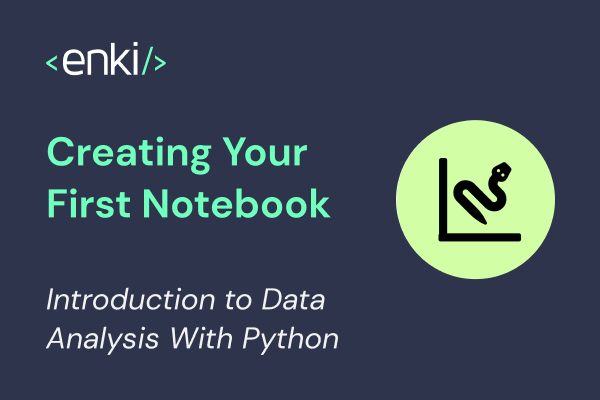 This is part of the “Intro to Data Analysis with Python” series of posts, with content from the Enki app. If you stumbled upon this, you could start from the beginning.

Open your terminal and type jupyter-lab if you installed the application locally or go to their website to open the online version.

This will give you an empty notebook with a single empty cell.

At the top, you can choose what kind of cell this will be. There are two types; Code and Text/Markdown cells.

The first two cells are Text/Markdown cells. The first one contains markdown and the second one contains that same markdown but executed to show the resulting text.

💡 To learn more about markdown, check the Learn More section.

The third cell is a Code cell. The [1]: to the left of it means that it was the first Code cell that was executed. This cell prints "Hello World" to the console, which is shown underneath it.

The final two cells both have a [2]: before them.

Any Code cell that returns something will have a matching cell after it with the same number.

💡 The cell numbers don't have to be in order! If you run the same cell again or run a different cell, the number will increase.

Once you're done playing with the example, save the notebook.

💡 We will be using the same notebook in the next few workouts to import and analyze a dataset.